Bose is building on its SoundTouch Wi-Fi music system promise: to put all your music in one place, and let you play it wirelessly and effortlessly throughout the home. Unlike other Wi-Fi music systems, SoundTouch systems are simple, friendly and intuitive, letting you stream music in the easiest way available today — at the touch of a button.

Announced today, new one-piece, home theater and stereo systems join the SoundTouch Wi-Fi line-up. Deezer, Spotify and iHeartRadio join Pandora as compatible music services. And an enhanced app manages it all with new functionality, including stored music searches and an improved wireless setup process from your phone or tablet. 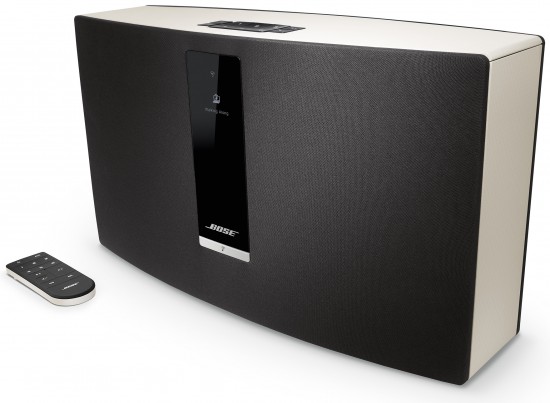 SoundTouch Wi-Fi systems maintain their effortless operation. Set six presets for instant listening, or control everything from the gadget of your choice. Access 20,000 Internet radio stations from around the world, music services, and playlists from your personal library — all at your fingertips. Start with one SoundTouch system, add more when you want, and stream the same music everywhere or different music in different rooms. SoundTouch systems connect directly to the Internet, and there’s no extra equipment required.

“SoundTouch Wi-Fi systems are made for everyone,” said Santiago Carvajal, category business manager for Bose Home Music Systems. “Wi-Fi music systems shouldn’t be intimidating or complicated. They should be so easy to use and so intuitive that you can’t imagine listening to your music any other way. This has always been the idea behind Bose SoundTouch systems, and now they’ve just gotten better.”

SoundTouch systems integrate Pandora and three new music services: Deezer, with on-demand listening to over 35 million songs — and instant set-up through an auto-account creation in the SoundTouch app; Spotify Connect, which lets you access the latest Spotify features via the Spotify App — and play music on any SoundTouch system; and iHeartRadio, providing its lineup of live radio stations and the ability to create your own. Each is integrated to be one touch away through six presets that can be set and changed for personalization and spontaneity. Set one for your backyard barbeque, another for your children, holiday parties, sports or talk radio, favorite artist — even a music service playlist.

The improved SoundTouch app offers a more streamlined setup process that can now be done wirelessly from your tablet or phone. It lets you find artists and songs in your music library quickly with a new search function, and adjusts the low frequencies to your liking with a new bass control feature. For added flexibility, SoundTouch music systems are also AirPlay enabled to stream content from an iPad, iPhone, or iPod touch.

“Music is at the heart of almost everything we do,” said Carvajal. “So we asked ourselves why the world wasn’t playing it more at home. Like so many things, it’s become too complicated and SoundTouch systems change that. We put all your music in one place. You control it in the easiest way available, and personalize it for what you love and how you live.”

New music services and functionality will continue to be added regularly, and all software updates are free. Bose SoundTouch Wi-Fi music systems are supported by the Bose Customer Experience Center, the most knowledgeable, dedicated and helpful service team in the industry.