At a special listening and audition event today, Sony Electronics introduced its 2013 Home Audio product lineup, highlighting the STR-DN1040 Audio/Video Receiver and the HT-CT660 Soundbar. Available in June, both products boast of Sony’s legendary commitment to quality sound, and are packed with connectivity and accessibility features. Both the STR-DN1040 receiver, priced at $599, and the HT-CT660 soundbar, priced at $399, will be available at Sony Stores as well as retailers nationwide.

“Our rich audio legacy leads consumers to expect continued innovation and performance from Sony audio products,” said Neal Manowitz, director of Sony Electronics’ Home Audio group. “The newest AV receiver in our line has the simplest, most user-friendly interface, which when combined with a world first and only AVR feature set of built-in Wi-Fi, AirPlay and Bluetooth connectivity, raises the bar with respect to usability, and does so with knockout sound performance. Likewise, the new soundbar extends the Sony line and brings theater-like, high-definition sound to any room in the house, with Bluetooth ease and convenience.” 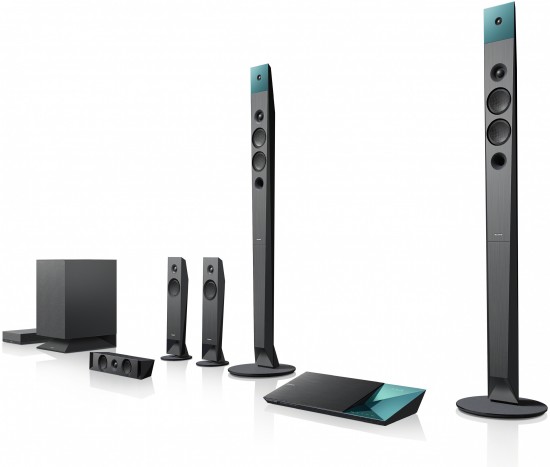 A Receiver Built For Sound – And More

The STR-DN1040 AV Receiver delivers premium home theater performance with 7.2 Channel 1155 Watts (165 W x 7) of power and ten HD inputs (8 HDMI in), and features a newly redesigned chassis, an increased power transformer as well as Sony-designed capacitors and audio-grade transistors. “Just like a musical instrument, this AV receiver is specially tuned to bring out the very best sonic performance,” said Aaron Levine, product marketing manager of Sony Electronics’ Home Audio group. “There is a sonic performance reason for every part, every material, and every assembly technique put into this receiver.”

Sony offers consumers the only AV receivers with built-in Wi-Fi, Bluetooth and AirPlay, and the STR-DN1040 receiver leads the way. Wi-Fi enables the STR-DN1040 receiver to easily access streaming media sources, and has integrated applications for Sony Entertainment Network’s Music Unlimited, Pandora, Slacker, vTuner, and more, as well as capabilities to seamlessly stream music from DLNA enabled PCs. Moreover, with consumers more often accessing, storing, and playing music from mobile devices, the receiver also has built-in AirPlay and Bluetooth, allowing it to wirelessly receive the broadest amount of music from phones, tablets and computers. Users can also operate the receiver with the free Media Remote app available for both iPhones and Android phones.

“The newest AV receiver in our line has the simplest, most user-friendly interface, which when combined with a world first and only AVR feature set of built-in Wi-Fi, AirPlay and Bluetooth connectivity, raises the bar with respect to usability, and does so with knockout sound performance.

Also available in June is the STR-DN840 AV receiver, a 7.2 channel, 1050 Watt juggernaut with the same connectivity convenience of built-in Wi-Fi, Bluetooth and AirPlay. With six HDMI inputs, 4K pass-through, Sound Optimizer and more, the STR-DN840 is aggressively priced at just $449.

A Soundbar To Bring Boom To Any Room

Designed to bring the TV experience back to life, the HT-CT660 Soundbar is a 330 Watt system producing exceptional audio marked by rich, natural sounds and incredible clarity. The 2-way, 4-driver mica reinforced speaker system delivers exceptional sound clarity with detailed highs and lows, with big sound and minimal distortion, all complemented by a wireless subwoofer that brings feeling back to the low end, along with an added convenience of being able to be placed anywhere in the room. The three HDMI inputs allow easy connection to up to three devices, such as gaming consoles, Blu-ray Disc players and cable or satellite boxes, while delivering superior high-definition picture and sound quality. Movies are presented as directors intended, with Dolby TrueHD and dts HD Master Audio modes the reproduce high definition sound for uncompromised quality.

Adding to the soundbar’s arsenal, Sony’s S-Force PRO Front Surround 3D technology synchronizes sounds to match the motion and depth of images on screen so viewers enjoy a fully immersive, simulated 3D surround experience without the bother and clutter of surround sound speakers.

Connecting the HT-CT660 soundbar with mobile devices such as phones and tablets to stream music is as simple as one touch of any Near-Field Communication (NFC) or Bluetooth enabled device. And with Bluetooth standby mode, you can start streaming and enjoying music without having to turn on any additional components.

Home Theaters To Bring Cinema To The Home

Priced at $699 and $599 respectfully, the BDV-N8100W and BDV-7100W home theaters in a box are available now at Sony stores as well as electronics retailers nationwide.